With all of the people coming in and out of the rehab ward at Stanford, many of them touching and massaging Molly’s body, it opened up a new world of sensation. It also opened up a new world of no sensation, because Molly didn’t have any from the neck down. Let me re-phrase that. Molly had sensation, she just didn’t know what it was … because that information wasn’t getting to her brain.

I found this picture of those days. Here is a group of friends massaging Molly. That’s Frank Doran Shihan working on Molly’s arm, the head instructor of Aikido West, where Molly and I have trained for 30 years, and other close friends from the dojo community. 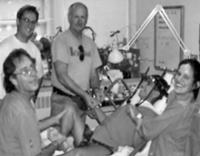 Now, with the onset of spasticity showing up in her body, she would go into a fetal position stiffness at the drop of a hat. Once, I was reading something in the newspaper out loud to Molly, and when I turned the page, the sound of the crinkling paper set Molly’s body off into a fetal position. She would go from being extended, with her arms and legs out, to contracted and folded up very quickly. If you blinked, you would miss the transition.

We laughed about her involuntary body reactions to various kinds of noises. We would be lying together … relaxed, and all of sudden …

WHAM, her body would reflex into a fetal position. Somebody put a plate down in the kitchen.

WHAM, somebody was walking down the hall.

WHAM, the mailman just dropped the mail in the box.

I had to be wary of where I was when this would happen. Seriously. When her knees came up, you had to watch out. More than a few times, I got caught in a vice like grip between her legs.

Twice we had to call the fire department to get me free.

Haha … just kidding on that one!

It did take a while for Molly to relax out of that contracted position though. Over time and a lot of focus and practice, and working with a dear friend, Molly learned to feel the spasticity as a wave, and she learned how to surf  those waves. She still does today.

I will talk more about this in a future writing. It is amazing what anyone can accomplish when you are truly committed.

The body contact and massage Molly was having, also revealed other findings. Bruises in various places on Molly’s body, bumps and scrapes, and indications that body parts were out of alignment.

This all made sense, considering that Molly had been in a high speed rollover, and whacked on the head multiple times, her body slammed against the steering wheel and roof and windows and frame of her car, and finally against the ground.

In truth, her body was completely whacked out of alignment. We didn’t find out just how much until a couple of weeks later, but all of the massaging, touching and contact, were bringing up new information.

So Molly made a call to a friend of ours. A chiropractor that had a clinic in Oakland, and who also taught at several chiropractic colleges in the SF bay area. The focus in his practice was on the structure of the spine, and how the boney structure of the spine affects the function of the cord and the nerve bundles that come off the cord. In his research, he had dissected well over a thousand bodies, to look at and study the spine and the spinal cord. He had written many papers on the alignment of the body and the bones, and he was very outspoken about western medicine’s failure to address the structural integrity of the whole body.

He wasn’t available for a couple of weeks, but when Molly told him what had happened, he was eager to come down and see her.

While we are on the subject of body alignment, when Molly had the two surgeries on her neck, those surgeries were done on a neck that was completely out of alignment from the crash and all the hits. Her atlas/C1, was way out of place.

Molly had to figure out a way to use the back of her tongue to break up the adhesions and the scarring in her throat. Necessity is the mother of invention.

One would think that when someone has a car crash like Molly did, that they would look to see if the structural integrity of the whole body had been compromised in any way. That makes sense right?

Mainstream medicine doesn’t teach that however.

The doctors who treated Molly, spinal cord experts and neurosurgeons, related only to a 6-inch area of her spinal cord. They never inquired about the details of the accident, or into Molly’s background, which would have been useful information for them when considering treatment options.

Instead, Molly was viewed as a spinal cord injury and a statistic.

If we could roll back the clock, we would have had a chiropractor, an osteopath, and an acupuncturist consult with us before any surgery would have been contemplated. We already know that we would never have consented to surgery if we knew then, what we know now. We would have stopped at traction, and moved on from there.

These are the details of Molly’s injury: There was a crack and slight displacement of her spine. The fin-like boney structure at the back of the vertebrae at C6 cracked, and this allowed C6 to kick forward, and the spinal cord got pinched between C5 & C6.

Nothing below the point of injury was damaged. All the nerves were sitting there, waiting for a signal.

Waiting for a signal, that couldn’t get past the pinch, between C5 and C6.

Haha. Excuse me but I can’t believe I just wrote that. I feel like I’m on South Park right now and I keep looking around for Cartman and the rest of the gang.

There are several readers who were curious enough to write and ask me specifically about it though. They asked, “Hey, we’ve been hearing plenty about bladder control and #1, what about bowel control and #2?”  Here you go!

Once Molly started on solid foods, she also started on an every other day bowel program that consisted of the following:

Molly was given a “magic bullet”, which was a suppository. They were very powerful and generally took about ½ hour or so to work.

Molly was completely constipated from all of the drugs, pain meds and anesthesia that were in her system. Nothing moved, and nothing had moved, for a while. To complicate matters, she had no control over her bladder or her bowel functions. She couldn’t feel any of the muscles she needed to feel, so there was nothing to bear down on and nothing to squeeze.

Once the magic bullet started to work, one of the nurses would take a gloved finger and press up into her rectum, and push against the bowels that were stopped there. The combination of the suppository and the finger stimulation would get things to move. This is called digital stimulation.

I learned how to catheterize, and how to digitally stimulate Molly’s bowels with my gloved finger in the hospital. I didn’t really like doing it that much, but it had to be done, especially when she came home from the hospital.

They were telling me that I would have to do this for the rest of my life.

It was intimate, in a different kind of way.

It was a kind of intimacy that I had never experienced before with Molly.

It was not romantic intimacy.

It was like Molly wasn’t my wife, she was my patient. It added to my confusion and worry, which was building up.

As part of her bowel program, because Molly couldn’t move, she had to be transferred into a commode chair. Since that one time that they almost dropped her during a transfer, they now used 3 people instead of two, always being mindful of the halo.

Even with three people, moving Molly was like moving a sack of water. She couldn’t help and there was no form to her body. Everything just flopped around.

The first time they transferred Molly to the commode chair, she got stuck sideways in the hole of the toilet seat. She had one bun literally stuck in the hole and they couldn’t move her or get her unstuck. I am not making this up.

The nurses started to freak out, concerned that they did something wrong and that Molly would be hurt, but Molly started laughing because it was really funny, and her laughter completely changed how the nurses were relating to the whole thing.

From freaked out and upset, to relieved, calm and seeing the humor.

They did need 4 people to get her unstuck though, and they had to figure it out before the magic bullet started to work, if you catch my drift.

The incident of getting stuck in that commode chair, has ended up being a comic relief and teaching story that the main OT in rehab still uses to this day.