There are many practical applications of Aikido from a sitting position: We all sit. How does one respond to conflict while seated? Molly has continued her practice of Aikido and has been a guest instructor in a variety of venues: the Aiki Expos, the Pacific Association of Women Martial Artists, and the National Association of Women Martial Artists to name just a few. She has also conducted classes in her home dojo at Aikido West in Redwood City, CA, in Jeramy’s Menlo Park, CA dojo Aikido At Noon, and in many other dojos both in the US and in Europe. 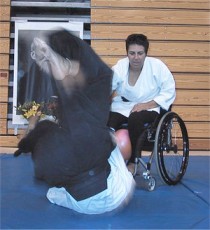 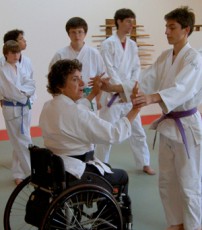 We are developing videos in response to requests by Aikidoists and other martial artists both domestically and internationally who face the issues of training from a wheelchair or with a wheelchair-mobile person. The videos present a “how to” approach to training with significant differently-abled individuals. 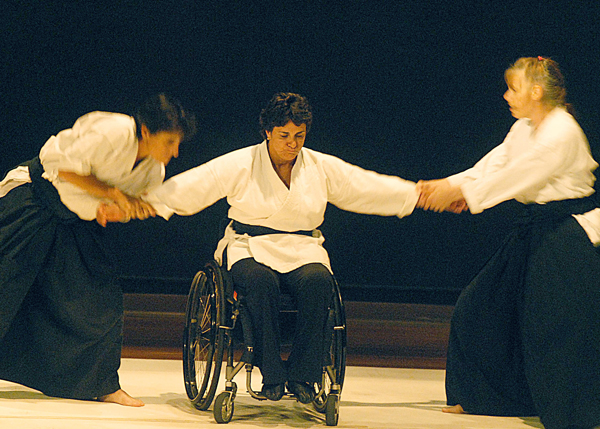 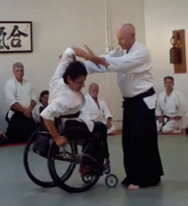 Molly was one of Jeramy’s ukes for his 4th Dan demonstration.

Molly was awarded her 4th degree black belt in Aikido, training from her wheelchair and sitting on the mat after she was injured. Her September 6, 2013 demo:

Jeramy was awarded his 4th degree black belt on the same day. Here is his demonstration:

“The training, the practice of aiki, aids my recovery and attitude tremendously.” –Molly Hale

Aiki Extensions: Provides support and enhances communication among those who apply the principles of Aikido and practice in venues outside of conventional dojo settings.

There are no upcoming events at this time.
Video content
Please subscribe to our newsletter and blog notifications in order to view additional video content.
GET INSTANT ACCESS TO OUR VIDEO LIBRARY!
* We never share your e-mail with third parties.
» You must have cookies enabled to access the video library
×
SUBMIT
SUCCESS! Please choose a video from our library below to get started.