Molly Hale discovered martial arts training after she fractured her 5th lumbar vertebrae in 1981. Doctors told her that she might lose her ability to walk, but she incorporated a physical conditioning program with her martial training, earned her black belt a few years later, and began teaching the children’s classes.

In 1995 she broke her neck in an automobile rollover, and she was told that she’d never move intentionally below her shoulders. Faced with the prospect that she would never walk again – she refused to accept the prognosis. She believed, instead, in herself, in her body’s ability to communicate and heal, in her spirit’s astounding resolve, and in the capacity of her friends to support her recovery. 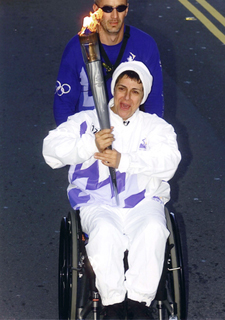 In 2002, Molly carried the Olympic Torch in Oakland, CA.

Six years after her accident Molly took and passed her third degree Aikido black belt test, in 2002 she carried the Olympic Torch towards Salt Lake City, and Moment to Moment: The Healing Journey of Molly Hale, a documentary about her, premiered in 2003.

She participates in daily physical practices and is able to walk in water now, continuing to maximize her health and well-being.

Keep reading. Next, The Automobile Rollover.