United by abilities: the capacity to overcome challenges!
Concentric Media and filmmaker Dorothy Fadiman joined forces with Abilities United to host a film festival debut of “The Annie Gill Story” as well as present three additional Concentric Media films. The audience of 250 community members was moved by each of the individuals featured in the films, including Abilities United participant, Molly Hale, whose story of how she utilized warm-water aquatic exercise and other therapeutic exercises to recover from her spinal cord injury was recounted in the film “Moment by Moment’.” 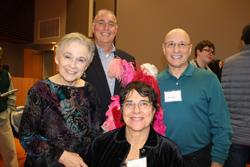